Kentucky Derby Traditions - The History, the Hats, the Roses and More 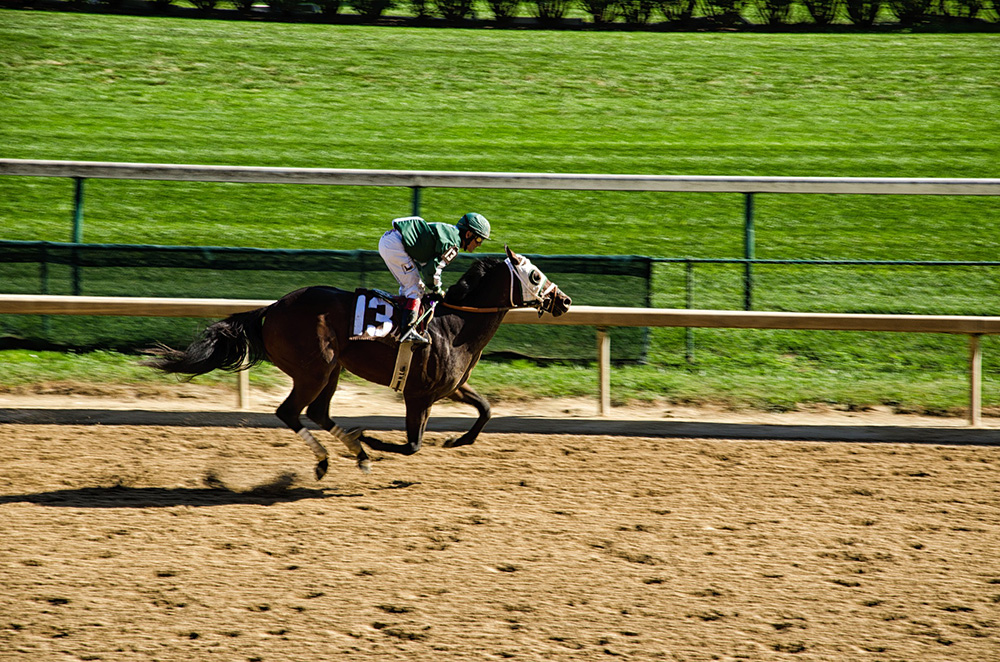 With over 100 years of stories, traditions, and memories, this is truly one of the most historically-rich events in the United States. Here we’ll discuss just how these customs and traditions of the Kentucky Derby came about. 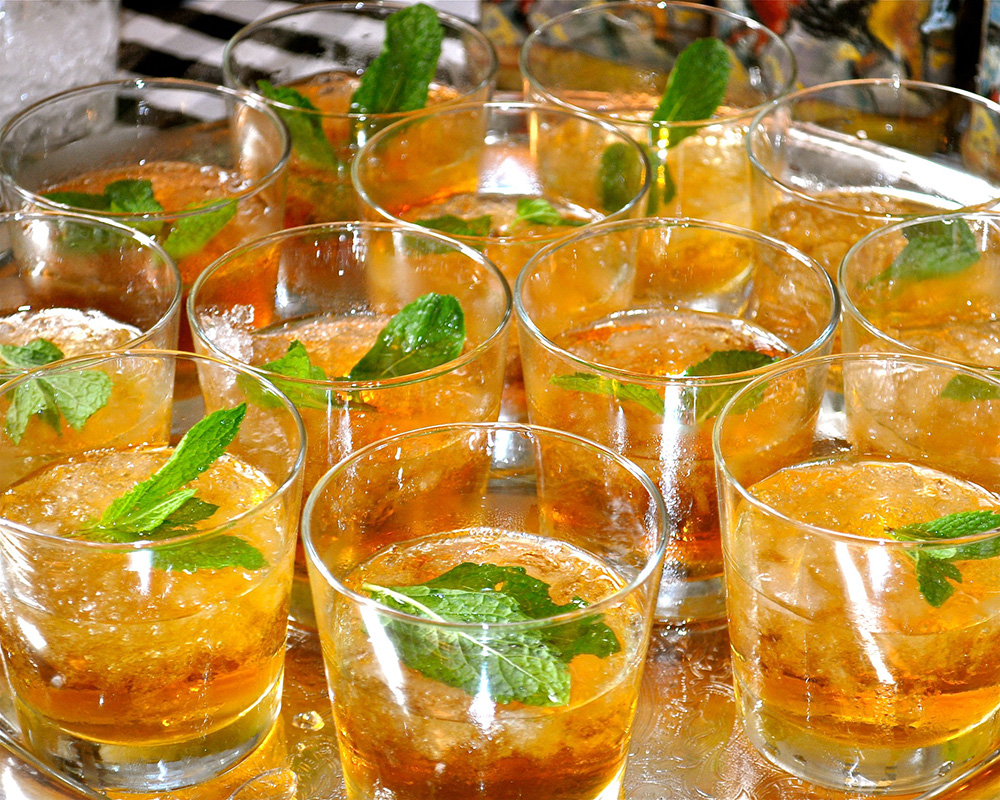 Food and drinks are a derby staple. And if you’re looking for Kentucky Derby traditional drinks, you really can’t skip past a Mint Julep. Here are a few interesting food traditions of the Kentucky Derby:

The Mint Julep is an iconic Kentucky Derby traditional drink. This drink’s official association with the derby dates back to 1938, but its history goes back much farther than that.

Without bourbon, a Mint Julep wouldn’t exist. Bourbon is one of the most important Kentucky Derby traditional drinks. A few years back, Churchill Downs updated their official Mint Julep recipe to include a more authentic Kentucky bourbon, Old Forester Mint Julep, which is owned by Brown-Forman.

Bourbon has been a long staple of the derby, and not just in Mint Juleps. Recently, Churchill Downs made Woodford Reserve, also owned by Brown-Forman, the official bourbon of the derby. Bourbon is produced right in Churchill Downs’ backyard, making it a significant part of the derby since its origins. Throughout the years, many bourbon brands have fought to become the official bourbon of the Kentucky Derby, as this is the epicenter of the bourbon tradition.

Although not officially associated with the derby, a hot brown sandwich is a famous Louisville staple that many derby-goers eat on their visit. This open-faced sandwich layers sliced turkey, bacon, tomatoes, and Mornay sauce on top of delicious thick-cut toast.

Back in 1926, the chef of Louisville’s Brown Hotel invented this sandwich as a more elegant alternative to ham and eggs. In the 1920s, the Brown Hotel drew as many as 1,200 guests every evening for dinner and dancing, and the Hot Brown was the perfect glamorous late-night snack.

Now visitors from all over the world visit the Brown Hotel on the Kentucky Derby weekend to taste this magnificent dish. 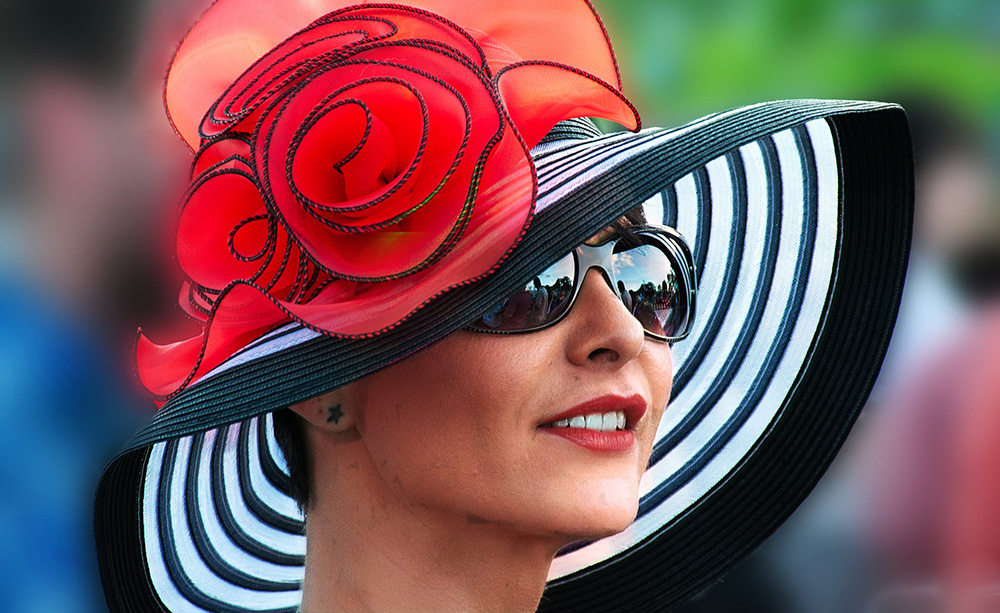 There is no Kentucky Derby without fashion. For years, the Kentucky Derby traditional attire has been elegant and unique, with derby-goers donning massive hats, beautiful dresses, sleek suits, and more. Here is the history of everything from Kentucky derby hat traditions to beautiful, elegant attire.

The tradition of Kentucky Derby hats dates back to the very first Kentucky Derby in 1875. The derby’s founder knew the race track had a reputation as an immoral place. He wanted to shift this reputation to more of the high-class status that European race tracks held. He spread the word to the wealthy to add a bit of elegant flair to the event.

Back then, southern belles and the wealthy wore hats to proper events like church, day parties, and more. Sure enough, the wealthy came to the derby and transformed the track’s reputation, making it an elegant event. In the 1960s, as fashion norms loosened, women began to wear more extravagant hats in order to stand out.

From there on out, women wore wide-brimmed, elegant, designer hats that exhibited wealth and elegance.

As for men, they often wore formal hats that were in style at the time. For example, in the early 20th century, many men chose to sport a straw boater hat. Another common look for men was the Panama fedora, which was popularized in the mid-19th century.

Men and women have both dressed in the most elegant wear when it comes to the Kentucky Derby. As discussed, the derby was now an elegant destination for the wealthy, and so attire followed suit. In addition to glamorous hats, women would wear the finest dresses.

Back in 1875, Colonel Meriwether Lewis Clark Jr. used high-class women to recruit the upper class to the race track. These women wore their Sunday best to the derby, and the tradition stuck. Nowadays, you’ll see women wearing everything from gorgeous sundresses to formal cocktail attire.

As for the men, the derby has always given them an excuse to dress to the nines. Men followed the attire norms just as women did and wore their best suits, hats, and shoes. In recent years, men have embraced pastels and fun patterns in their suits and fashion.

The Garland of the Roses Tradition

The Kentucky Derby is also known as the “Run for the Roses.” But where did this name originate from?

“The Run for the Roses” originates from the garland of roses that is presented to the winner of the Kentucky Derby. The first instance of this was in 1896, when the derby winner, Ben Brush, was presented a beautiful arrangement of pink and white roses. In 1904, the red rose became the official flower of the derby. In 1932, the garland, as it is known today, made its first appearance to derby winner Burgoo King.

Since then, the beautiful garland of 400 roses has been presented to the derby winner.

The Kentucky Derby is full of wonderful traditions that date back over one hundred years. It’s a historically-rich event that everyone should experience at least once in their lifetime. To make sure you’re dressed for the occasion, shop our elegant, designer Kentucky Derby hats today!